Stomaching Gaia: From the visual to the Visceral 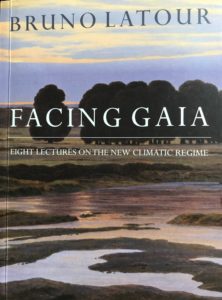 I recently re-read Latour’s “Facing Gaia” lectures. There would be a lot to say about this but one of the things that struck me was his reference to the “face” in the title. Why exactly do we have to “face” Gaia, why is the face and the visual still the angle from where to encounter issues of earthly, more-than-human politics? In a similar way Haraway also insists that it is our task to look the animal in the eye even though everyone who has a pet knows that there a host of different modes of recognition in the animal kingdom, most importantly: sniffing. The notion of “facing” Gaia also has the disadvantage that it more or less tacitly assumes that “we” and “Gaia” are different, separate persona that have become alienated and that “we” know have to look at and for Gaia again. Isn’t this an all too common conception of the recent encounters with Gaia?

Isabell Stengers seems to have a different take. She speaks of the “intrusion of Gaia” which suggests that Gaia is not a planet external to us on which we live, but something that is always already insight of us even though – as Stengers also makes clear – as she is, as a goddess, also a transcended force. And this force, both inside and beyond “us” is, as Stengers makes clear, first and foremost bacterial. “Living things may well count on Gaia, but what counts first and foremost are the bacteria, and they are something else that exceeds us: an uncontrollable power upon which we depend. […] They are on Gaia’s scale and like her“ To be fair: Latour’s lectures contain quite a lot of passages that nicely capture such a topological relation to Gaia, especially when he criticizes Lovelock for conceiving Gaia as a superorganism. But why does he stick to the visual repertoire to describe the Gaia event-encounter? Wouldn’t it be more suitable to go for a more visceral rather than just visual imaginary? Especially when we think of Gaia less in terms of a self-regulating superorganism like Lovelock and more in terms of a “symbiotic planet” (Margulis) where all live processes depend on relations with the microbial? The task would probably be to stomach Gaia through getting in touch with our gut microbes instead of trying to look her in the eye. So, remember to look for the planet-goddess next time you go to a colonoscopy.