Trees of Life Exhibition in Frankfurt 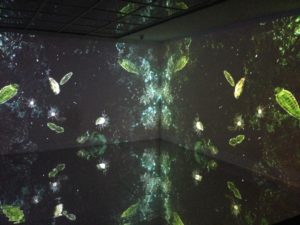 The Frankfurter Kunstverein is presenting the exhibition „Trees of Life. Stories for a damaged planet“ which features a series of interesting works on microbes and symbiosis. In fact, the exhibition itself is a symbiosis of sorts between science and art. Institutionally, the exhibition is a collaboration between the Kunstverein and the Senkenberg Museum for Natural History curated by Franziska Nori from the Kunstverein and the geologist Philipe Havlik. The exhibition itself features a series of our most beloved social theorists like the inevitable Donna Haraway, Bruno Latour and Anna Tsing in addition to the Sym-biologists Lynn Margulis and Scott Gilbert whose ideas appear in video and in the texts. The exhibition even shows the Lynn Margulis documentary “Symbiotic Earth” by John Feldman. Given the prominence of Margulis throughout the exhibition I wondered why it still sticks to the “tree of life” notion. After all, like Deleuze and Guattari, Margulis is “tired of trees” and proposed, not the rhizome, but the “hand of life”. In this alternative classification the palm represents bacteria, the real basis of all life on earth, whereas the four fingers represent the four other kingdoms of life – animals, plants, fungi, and protoctists which all go back to some kind of “symbiogenisis”, that is, the merging of bacteria.

In addition to the theory, I really enjoyed much of the art. Two artists in particular, Dominique Koch and Sonja Bäumel, picked up the topic of (microbial) symbiosis in quite fascinating ways. Sonja Bäumel’s work reflects on what new scientific research on the microbiome means for our understanding of the self. In one of the exhibited pieces “expanded self” she created a microbial imprint of her skin bacteria on a culture medium which then autonomously grow to become a microbial externalization of herself. She thus shows that the self does not end at the skin but is deeply entangled with microbes populating, entering and leaving the body constantly. Dominique Koch’s video “holobiont society” mobilizes symbiotic thinking for a new look at the social and at current political challenges. The video is a film montage with electronic music and fragments from interviews with Donna Haraway, post-operaist Maurizio Lazzarato and biologist Scott Gilbert. The film asks how the new biological insight that – as Scott Gilbert has put it in his famous co-authored paper – “we have never been individuals” can be brought to bear on the current, rather bleak political situation, how it could challenge neoliberal capitalism, racism, and ecological devastation. It, of course, doesn’t really provide answers, but asks the right questions.